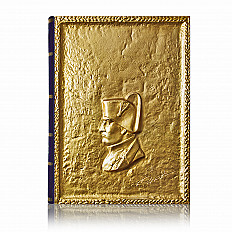 The Golden Limited Edition of the Official Autobiography

Napoleon’s autobiography published by D’ORO Collection in 2016 is the new edition of the first publication of 1975. It is entirely handmade and available in numbered copies. This Volume is a collection of texts written or dictated by Napoleon himself. It contains a faithful description of his deeds in the grandeur and majesty of his historical times. As the introduction by Edvige Santiné explains, before coming up with the final draft of the work he had sketched out more than fifteen books without disguising any facts, despite the great difficulties.

The text consists of a preface, two introductions written respectively by Victor Hugo and Edvige Santiné and extracts from Napoleon’s diaries, divided into 18 chapters and accompanied by historical and official documents taken from his secretaire by Edvige Santiné herself.

This 253-page book is printed in only 499 numbered copies and contains 82 engravings.

The Napoleone Volume published by D’ORO Collection is entirely handmade using artisan paper with 220 gram thickness. Each page is stitched by master craftsmen using wooden frames of the type used in the Middle Ages. The covers of Napoleone are made of blue leather lined with light blue silk. Two bronze reliefs, gilded by immersion into a 24 Kt gold bath, form the front and back covers.

Napoleon’s profile stands out on the front cover.

A luxury book of unique value, shape and contents – created by merging the ancient bookbinding techniques with the works of great artists of everlasting renown.

ISBN: Handmade book with no ISBN

Translation: Translation into other languages available upon request

Production: Entirely made in Italy at the D’ORO Collection workshops in the heart of Rome

Covers: Book covers and spine in blue leather. Both covers are fully covered by bronze reliefs gilded by immersion into a 24 Kt gold bath.

Packaging: The book comes inside a blue velvet and black Moirè silk case