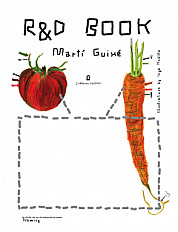 After Blank Book, Tattoo Book and Food Book, here we are with R&D Book. This time the subject is research and development, as the title suggests: doing and drawing, by Martí Guixé. The moment has come to explore nature, inventing fruit and vegetables with weird names and shapes, and unexpected flavours.

Using four different levels – analysis, simulation, theory and nomenclature –   children and adults can try their hand at science; mixing carrots with tomatoes, artichokes with ginger and raisins with mango, in the hunt for new shapes.

Analysis involves recognizing the illustrated fruit and vegetables following arrows highlighting the distinctive features of the parts under the microscope. The next step is to simulate flavours and texture, an equally important phase when crossing edible things, and aimed at identifying implicit but not visible characteristics.

What is then needed is to formulate a theory about what you will get from the experiment, drawing the outcome of the cross between two or more fruits or vegetables.

The result appears inside the square with the dotted outline. Its name will depend on reference sources, the imagination of the neo-scientists, and their creative use of language.

Then hey presto! The new ingredients for experimental menus and vegetable or fruit salads are ready.

The R&D Book is large, entertaining and thought-provoking. And it appeals to both adults and children alike. In typical Martí Guixé style, it is for doing rather than for reading. Its clear-cut simple graphics stimulate creativity and the imagination.

Marti Guixe was born in Barcelona in 1964. He studied Interior Design in Barcelona and then Industrial Design at Milan Polytechnic.

He lives and works “on living matter” between Barcelona and Berlin, devoting himself to inventing “brilliantly simple ideas of curious significance”; a self-designated “ex-designer”, he works for such companies as Camper, Chupa-Chups, Desigual, Droog Design, Saporiti and Watx. His work has been exhibited at MoMA, New York, the London Museum of Design, MACBA in Barcelona and the Centre Pompidou in Paris.

R&D Book is his fifth for Corraini, after Toy weapons, Blank