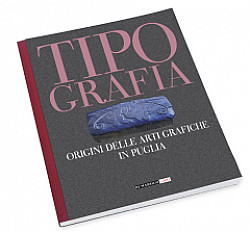 Precious book that retraces the stages of this real art from an unpublished transcription of two items of “Nova Encyclopaedia” by Giacinto Gimma on the birth of Typography. The transcript is a prelude to an investigation into the printing activities, starting from a rigorous scientific-technical base, examines the history of this ancient profession from a unique socio-cultural perspective. The stories are unraveled focusing episodes on the life and profession of the architects of printing: emerges a narrative of the relationships of printers, when set up shop in society, when married sons and daughters with their children of colleagues and associates when sending for sale or inheritance their technological assets. The stories branch off in several directions: in the chapter “The music does not exist” is detected as much production has been lost of dozens of musicians from Puglia forced to emigration for press. The authors have a sort of conclusion of the adventure of the early typographic age of Puglia on the threshold of the Unification of Italy and printers have been investigated by many nineteenth-century archival documents. The book is characterized by a unique design: There are records of reading differentiated chase, exceeds that run parallel to a stream of episodes, microstories, adventures. We draw attention to a skill and mastery of writing styles glibly practiced by Angela Accarino e Francesco Quarto, putting the narrative thread of multimediality in real: the book can be read in its multiple dimensionality, not necessarily in the usual linearity. The rules of a “scientific” publication are followed by the presence of a useful index of names and in the glossary that provides only a few items but carefully selected.
Complete the unusual edition an impressive set of images, full of little known new images, that acts as a superb frame to a prestigious volume of form and content.

Curators
Angela Accarrino, writer and photographer, has always cultivated a passion for books in their physicality. She comes in this new dimension that makes exploring the ancient writings from an epistemological point of view.

Francesco Quarto, Officer of the Ministry of Heritage and Culture, librarian, has developed an intense publishing activity “digging” in archives and libraries, bringing out unknown precious artifacts and manuscripts printed editions that have allowed us to add new chapters to the story of printing. In over twenty years has produced more than fifty articles and monographs including particular importance has covered the discovery of an unknown Neapolitan printer of the sixteenth century.

With contributions by Maria Grazia Melucci, Director of the Library of the Conservatory N. Piccinni of Bari, Maria Virno, Officer of the National Library Sagarriga Visconti of Bari and Antonella Pompilio, Officer of Archive of the State of Bari.

The volume was made entirely from recycled materials.