Italy’s publishers expect their year-end revenue to be down by between a modest 1.1 and 1.8 percent as compared to 2021.

In a presentation today (December 7) at Rome’s Più libri più liberi—Italy’s book fair for small and medium-sized publishing companies—the Association of Italian Publishers (Associazione Italiana Editori, AIE) has presented its year-end industry statistics report on the market’s performance. The top-line takeaway is that 2022 is expected to come in with a slight decline in revenue between 1.1 and 1.8 percent, over 2021. The retail sales value should total between US$ 1.2 billion and US$1.3 billion. This outlook is based on Nielsen BookScan data for the first 11 months of the year.

In his commentary on the market’s performance, the publishers’ association president, Ricardo Franco Levi, told his audience, “The considerable resilience of sales is an important fact that’s a testament to the ability of Italian publishing to react. “Sales data reflects the responsible decision by publishers to keep retail prices unchanged, in the face of inflation and an explosion in production costs, starting with paper and energy–a costs explosion which obviously weighs particularly heavily on small and medium publishers. “That’s why it’s essential that the tax credit on paper is reactivated and that all measures supporting reading be maintained, starting with the 18App at a time when families’ loss of purchasing power is cause for concern.”

Diego Guida, president of the small publishers’ association and vice-president of AIE, said, “Once again, figures show how much of national publishing is made up of small and medium-sized publishers of great vitality but which, at the same time, have to deal with very difficult problems, starting with distribution. Medium-sized publishers are driving growth, but special attention needs to be paid to small and micro-publishers, which are suffering from the difficult economic situation in a very particular way.” 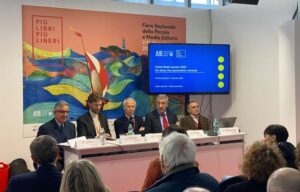