The Bologna bookstore, Giannino Stoppani, was damaged by fire in May. Sharjah World Book Capital has contributed €50,000 to assist.

On the sidelines of the ongoing Sharjah International Book Fair—which runs through Sunday (November 13)—we’ve had news that the Sharjah World Book Capital office has made a €50,000 donation (US$49,992) to the restoration fund for a Bologna children’s bookstore, Giannino Stoppani.

On May 20 at roughly 1 p.m., the store—founded in 1983 and set in the Palazzo Re Enzo complex—was damaged in a fire. Fortunately, no one was hurt in the blaze, according to news reports, leaving some 27,980 books partially affected and apparently still salable after cleaning. Roughly a fifth of the inventory may have been the most seriously damaged.

The store reportedly has been able to reopen partially since the May mishap, but extensive work is needed to see the remainder of the venue returned to working order.

It’s partly for just such situations that Bodour Al Qasimi, the outgoing president of the International Publishers Association (IPA), has kept the Sharjah World Book Capital office open since the emirate held the 2019 designation from UNESCO, starting a new network of former World Book Capital cities for mutual support. 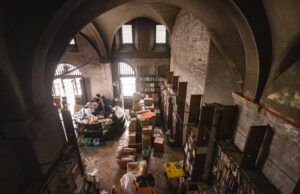